February twenty years ago, found me making my way to India for the first time with Deepak for a three-week holiday.  Excitement for previous adventures did not hold a candle to that of my anticipation for this trip.  February, Deepak suggested, is the best month to go – the wedding season is long over, competitive air fares are available and amicable weather shy of mosquito season is to be enjoyed.

Weariness from the delays and stress dampened my enthusiasm as I sank into my plane seat from Denmark to Delhi via Mumbai. I tried to avoid glancing at the journeys’ route on the screen in front of me.  It was a torture device that prolonged an already seemingly endless trip.

Hours later, glancing out the window upon our approach to the southwest coast of the country, provided a stunning sight of the beautiful sandy beaches of Malabar.  In contrast, nearing Chhatrapati Shivaji International Airport of Mumbai, shanty towns came into view.  Multicolored tin roofs of tightly packed makeshift homes meandered through higgledy-piggedly streets of this ancient city.

Such a vision was reminiscent of the Lenten TrócaireBox of my childhood in Ireland, but to view with my own eyes was further disturbing. Recognizing my angst, I remember Deepak saying to me …. “you will see the best of life and the worst of life here.  Try and accept it without judgment and you will be ok.”

We finally touched down at New Delhi’s Indira Gandhi International Airport late in the evening.  It was a hair-raising drive to the family home with Deepak’s brother. He, in similar fashion to the others on the road, zigzagged in between the highway lanes and honked prior to overtaking.  Doing so alerted the surrounding vehicles to expect movement from somewhere and to cast eyes in every direction.

Amid the fracas my eyes were glued to the historical metropolis outside.  The streets were a sea of colorful vehicles.  Trucks decorated with brightly colored symbols and slogans identifying their cargos, motorbikes transporting three people (usually parents and a young child) with Hindu deities or Christian statues to protect the riders; an occasional elephant donning a brightly painted trunk hauling freight strolling methodically; rickshaws pulling riders to work and elsewhere; Renault, Fiat and Suzuki cars whizzed by.

Dotted here and there was the odd thin cow rambling aimlessly without any bother.  Coincidentally, cutting edge technology was apparent; so many people on cell phones; women dressed in beautiful traditional saris in rickshaws texting; men dressed in kurtas busy chatting on their mobiles; store fronts advertizing various electronic devices.

The needy were clearly visible and approached cars halted at red traffic lights asking for money; others roamed the streets hoping someone would provide a meal or help in some other capacity.  Side-walks lined with rudimentary shacks gave way to private drive ways of magnificent homes with sprinklers misting manicured lawns.

Steeples from numerous temples, mosques and churches framed the skyline.  So many aspects of humanity were present in this city, a fusion of the “lock, stock and barrel” of life.

In retrospect, Deepak did describe it well – you see everything in this country.   The peaceful atmosphere in this kaleidoscope of a society was remarkable.  It seemed that space was carved out – limited though it was- for everyone.  And, it was done so in a relatively harmonious manner.

A reception of giant smiles and tight hugs from Deepak’s family assured me of a home abroad and set the tone for the holiday. Lounging after a welcoming dinner, family members talked earnestly about outings and exploits over mugs of hot chai and dessert bowls of chilled ras malai (cheese balls bathed in milk and flavored with cardamom). Talk of a trip to the Taj Mahal ensued; suggestions to visit The Pink City – Jaipur – were made; conversations about the Bharatpur Bird Sanctuary unfolded; sightseeing at The Red Ford was mentioned!

The next three weeks were going to be interesting and I was chomping at the bit for the adventure to begin.  Excursions in this Asian home abroad will be revealed next month.

*Regina is a Graduate of History and Philosophy from the National University of Ireland, Galway and a Post Graduate of Library and Information Studies from the National University of Ireland, Dublin.  She is the former Assistant Librarian of the Economic and Social Research Institute, Dublin; former Curator of the Irish American Archives at the Western Reserve Historical Society, former Executive Director of the Soldiers’ and Sailors’ Monument Commission and former Executive Coordinator of the Northern Ohio Rose Centre.  She serves on the Board of Directors of the Mayo Society of Greater Cleveland.  She can be reached at rcostello@ameritech.net 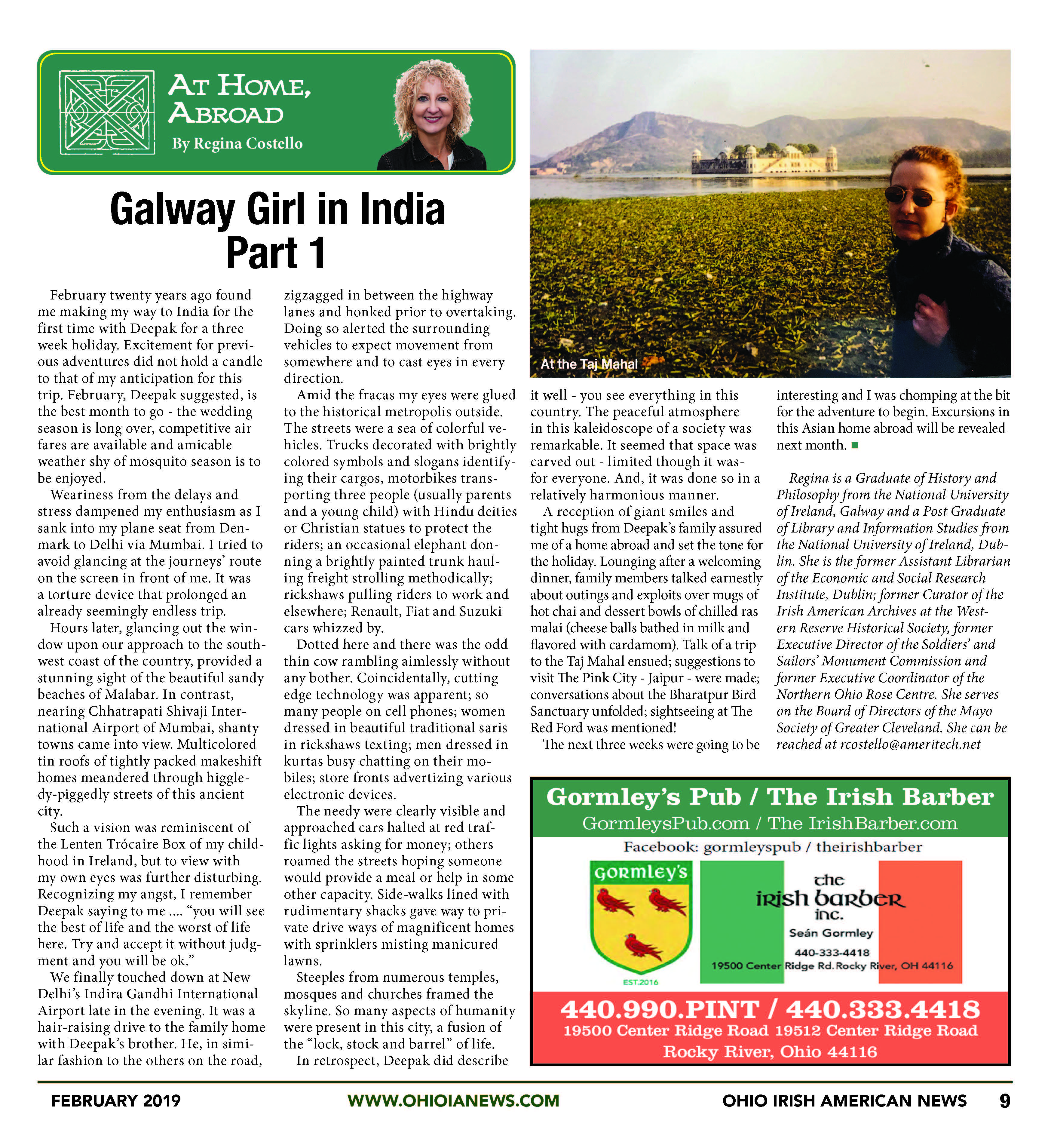 Slavery & the Irish: At Home Abroad

At Home Abroad: Free to Be You and Me