On the European Continent between 1600 and 1750 or so, the world of music was in one of its’ most productive and prolific stages. The Baroque Period laid the way for the format of modern orchestras, with strings and compositions for stringed instruments taking a more prominent position. Harmony and melody took a lead role in the hands of the great composers of this era.

The works of Vivaldi, Corelli, Tartini, Pachelbel, Handel and of course Bach, are known to almost everyone, even to those who claim to dislike or not to listen to classical music. Bach’s Prelude in G Major from The Cello Suites has been used in film, television and commercials and yet still manages to make me stop and listen whenever I hear it. Interestingly, The Cello Suites were an obscure study for solo cello until they were “discovered” by a young cellist by the name of Pablo Casals in a music shop in Spain in the late nineteenth century.

Today it is expected to be in the repertoire of any string player hoping to play professionally. If you would like an introduction to baroque music, The Cello Suites are worth a listen.

A century earlier in Ireland, Henry VIII, who had declared himself King of Ireland, introduced a statute to ban the “rhymers, pipers and bards.” He was correct in fearing the political power of the Irish musicians and poets. Later, Elizabeth I went even further,and decreed that harpers and bards were to be executed whenever found. However, in true Irish fashion, this solidified their position as the keepers of Ireland’s cultural traditions.

The greatest of these poets and harpers was born in 1670 in Co. Meath. Toirdhealbach O’Ceabhalláin, or Turlough O’Carolan, moved with his family to Ballyfarnon when he was fourteen. His father John had taken work at the estate of the MacDermott Roes.

Turlough had shown an interest and had some ability in prose and music and the lady of the house took a liking to him, and provided him with a teacher. At the age of eighteen he was stricken with smallpox which cost him his sight. Mrs. MacDermott Roes arranged for him to study the harp, so that he would be able to provide for himself.

After three years of intense study, she supplied him with a horse, money and a harp to begin his career. Turlough spent the next forty-seven years travelling and making a living as a poet and harper.

His first patron after Mrs. MacDermott Roes, was a land owner named George Reynolds, who encouraged the young musician to compose his own works. Sheebag Sheemore (Sí beag Sí mhor) was the result of that encouragement, and just one of the two-hundred and twenty or so of Turlough’s compositions that are performed regularly today.

Irish music is generally categorized into three groups: art music, folk music and harper tradition. The harper served as a bridge between folk and art music. O’Carolan was not a virtuoso by any means; what made him stand out was his unique style of composition that blended the two styles of Irish music and the influences of his european contempories such as Vivaldi and Corelli.

Turlough admired Francesco Geminiani, the Italian violinist and composer, who had authored a number of works on performance techniques and harmony. Geminiani was a frequent visitor to Ireland, eventually dying in Dublin in 1762. It’s believed O’Carolan met Geminiani in Dublin on one of those visits.

O’Carolan’s music reflects his personality: cheerful, playful, pensive and temperamental. His music only survives as single line melodies, so we don’t really know how he would have accompanied or harmonized them. Just like Bach’s Cello Suites however , they stand on their own.

In 1720 at the age of fifty, he married Mary Maguire, and by the time of his death was survived by six daughters and a son. A harper’s life was not an easy one, with constant travel from one great house to another or castle to castle, especially for a sightless person with a well known penchant for drink. By 1738, he was feeling ill and returned to the home of Mrs. MacDermott Roes. After a few days, he composed these lines to his very first benefactress:

Love of my breast and my friend.

Alas that I am parting from you,

Lady who succored me at every stage.”

Turlough died shortly after. It is somehow fitting, with his reputation as a hard drinker, that his final musical composition was dedicated to the butler who brought him his last drink. His final words: “the drink and I have been friends for so long, it would be a pity for me to leave without one last kiss.”

W.B. Yeats wrote, “Carolan, the last of the Irish bards, slept on a rath, and ever after the fairy tunes ran in his head, and made him the great man he was.”  (from Fairy and Folk Tales of the Irish Peasantry)

Grainne Yeats summarized her biography of O’Carolan with this last tribute: “Carolan bridges the gap between continental art music on the one hand and folk music on the other. At his best he wrote music that is distinctively Irish, yet has an international flavor as well. It is this achievement that suggests that Turlough Carolan does indeed deserve the title of Ireland’s National Composer.”

As someone who enjoys classical music, I find O’Carolan’s music as interesting as any of the other great composers of the baroque period. As a student of Irish language, his prose is full of humour and observations of the times that he lived. Dennis Doyle has  translated some of O’Carolan’s prose and performs a number of his compositions on the Celtic harp. You can check out Dennis at his webpage or see him at Cleveland Irish Cultural Festival.

Lynn Saoirse CD The Seas Are Deep, The Music Of Turlough O’Carolan

Carolan: The Life and Times of an Irish Harper by Donal O’Sullivan

The Complete Works of O’Carolan: Irish Harper and Composer 1670-1738

The Cello Suites, J.S.Bach, Pablo Casals, and The Search For a Baroque Masterpiece   Eric Siblin

Hope to see you at the next 10 week session of Speak Irish Cleveland that begins February 26th, to learn our mother tongue, and the influences that resonate with us still today.

*Bob Carney is a student of Irish history and language and teaches the Speak Irish Cleveland class held every Tuesday @Pj McIntyre’s. He is also active in the Irish Wolfhounds and Irish dogs organizations in and around Cleveland. Wife Mary and hounds Cian and Morrighanand terrier Doolin keep the house jumping. He can be contacted at carneyspeakirish@gmail.com. 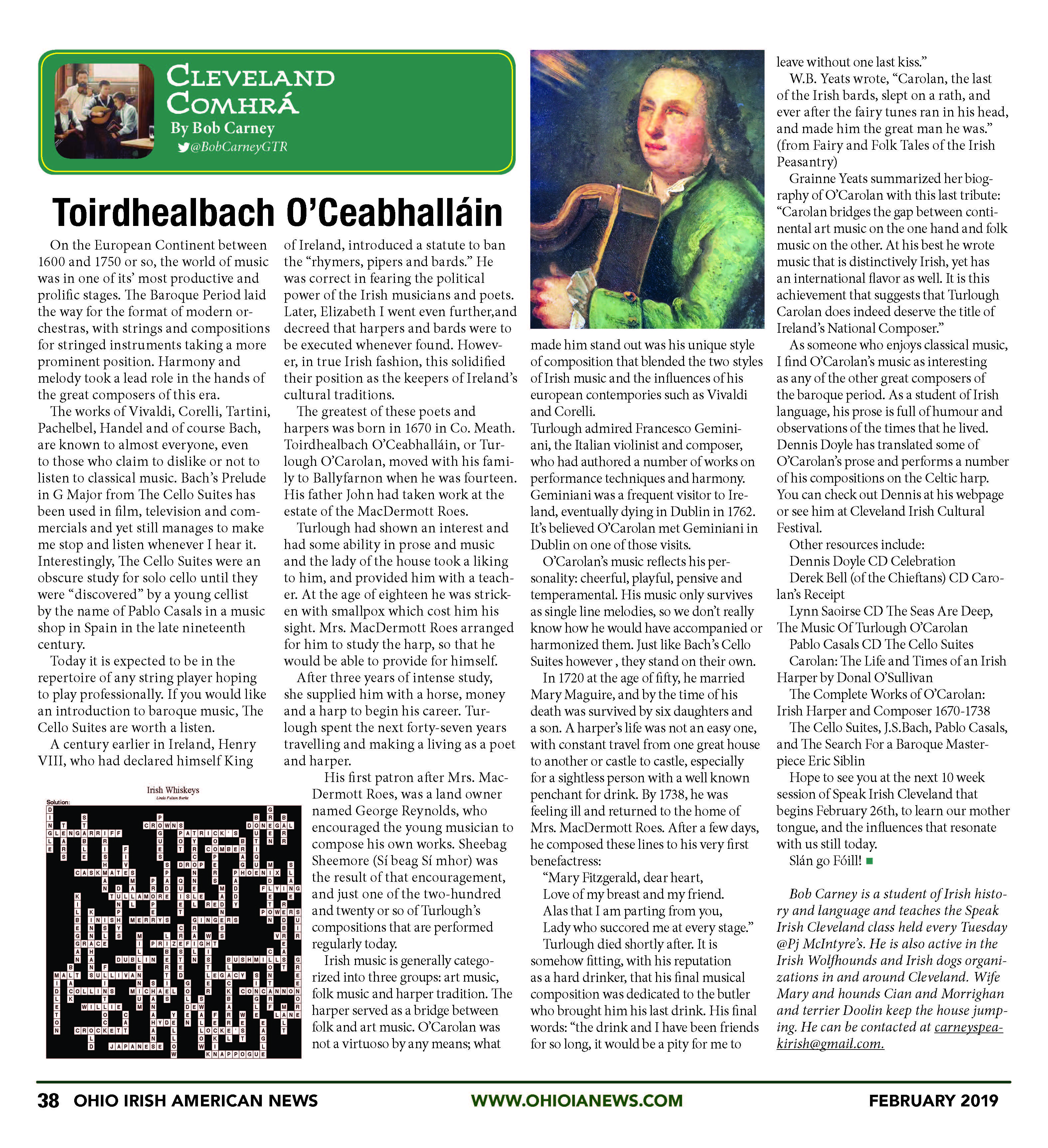 Young & Irish: How an Irishman Built the White House