Cleveland Irish: Business was a Boomin’
by Francis McGarry

The 1880s illustrated the intersection of Irish geopolitics and Cleveland daily life.  Irish American organizations and Irish American institutions became intertwined within the discussion of Irish independence. Clevelanders of Irish decent made decisions about whom and what to support in Ireland and remitted financial support as a result of that decision.

As the Irish in America grew in number during that decade, they also became more economically established as individuals.  In 1893, a selection of prominent Cleveland business folk were recognized in a local publication.  The Irish presence was not numerically dominant, but it was there.  That presence, and lack of, convey another aspect of Irish American life in Cleveland.  Listed below are those recognized: 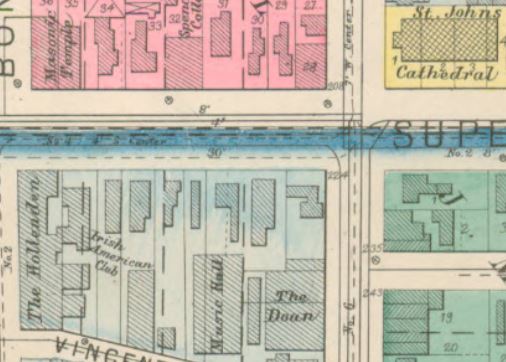 Temperance Billiard Parlor was established in 1884 by Mr. George P. O’Connor in the Perkins Block at the corner of Seneca and St. Clair streets.  Mr. O’Connor was born in Ireland and immigrated in 1864.  He was the proprietor of the Reed & Ellsworth Billiard Parlors in Erie, PA, and clerked at the Wadsworth House in Buffalo. George was known for the promotion of billiards in the “strictly scientific, healthful and moral sense.”

One of the oldest established and most reliable dealers of fresh, salt and smoked meats, poultry, fish and oysters (when in season) in South Cleveland was at 2632 Broadway.  John Byrne immigrated in 1860 from Ireland.  He was in business since 1871 on Harvard Street.

“Mr. Byrne is prepared to furnish the most wholesome and best of everything in its line at the lowest prices.  Neatness and cleanliness are strictly observed, the service is always polite and attentive; goods are delivered free of charge, and no pains or expense is spared to please customers.  Mr. Byrne is a highly popular and esteemed gentleman.” One of his grandsons is a member of the Ancient Order of Hibernians.

Mr. O’Brien was born in Ireland and lived in Cleveland since the early 1870s.  “He is a young and enterprising business man and sustains an excellent reputation in commercial circles.”

John R. Collins was one of the best-known businessmen on South Woodland Avenue, dealer in imported and domestic wines and liquors.  He established his business at 114 South Woodland in 1888 and “has made a host of friends.”  Mr. Collins makes a “specialty of Bass ale and Guinness stout.” John immigrated to Cleveland in 1880 and was a member of the Ancient Order of Hibernians.  He “enjoys the esteem of all with whom he comes in contact, either in business or socially.”

P.F. Funican established his saloon at 1242 Central Avenue in 1891.  He provided only the best and purest wines, liquors and malt beverages, and choice cigars, both imported and domestic.  Mr. Funican was a native Clevelander and a molder by trade.  “He is a member of the Ancient Order of Hibernians, and is deservedly popular with all who have dealings with him.”

Patrick Gavagan was born in Ireland in 1848 and immigrated to Cleveland in 1863.  In 1881 he owned and operated his own brewery at 5 and 7 Briggs Street.  Gavagan’s Cream Stock Ale and Porter were “celebrated throughout the whole of Northern Ohio.”  Patrick utilized only the choicest carefully selected hops and malt.  His ale and porter were “highly recommended by physicians.”

The best-known teamster and mover of household goods was T. Norris.  His business was located at 65 Water street.  He moved and hoisted safes, heavy machinery, boilers, and large blocks of marble and stone.  Mr. Norris was born in Ireland and moved to Cleveland in 1849.

T.J. Paisley, a native of Belfast, established a similar grocery on the west side in 1891 at 72 West Madison.  Mr. Paisley also supplied cigars, tobacco, baled hay, straw and feed.  He apparently served a different clientele on the west side. T.J. moved to Cleveland in 1887 and was financial secretary of the Home and Benefit Union.

George H. Herron, a popular and skilled interior decorator and painter, was considered one of Cleveland’s best fresco artists.  He employed ten to fifteen “hands”, all proficient in the trade.  George also was known for polishing pianos and general house painting.

Mr. Herron was born in Ireland and immigrated to Cleveland “many years ago when a child.”  He was a member of the Knights of Pythias, an organization whose founding was inspired by Irish poet John Banim, the “Scot of Ireland.”  Louis Armstrong and Warren Harding were Knights of Pythias, if you believe the interweb.

The McMyler Manufacturing Company produced derricks and conveyors, coal buckets, ore buckets, dump cars and kindred mining, quarrying and shipping accessories.  They employed 125 workers and in 1893 had begun to construct a second manufacturing plant.  Mr. John McMyler was born in Ireland, “but was raised and educated in Cleveland.”

These epigrammatic simulacrums are not representative of the totality of the Cleveland Irish.  This publication does demonstrate the transculturation of a somewhat random sample of Cleveland Irish fellows.

As Brendan Behan said, “All publicity is good, except an obituary notice.”  These recognized businessmen augmented the sociocultural leaders of the Irish in Cleveland. Collectively, the mobility and success of the Irish in this city substantiated the movement to open the city’s first Irish American Club in 1890 at Superior and East 6th.

*Francis McGarry holds undergraduate degrees from Indiana University in Anthropology, Education and History and a Masters in Social Science from the University of Chicago.  He is an assistant principal and history teacher.  Francis is a past president of the Irish American Club East Side.  He is the founder and past president of the Bluestone Division of the Ancient Order of Hibernians. 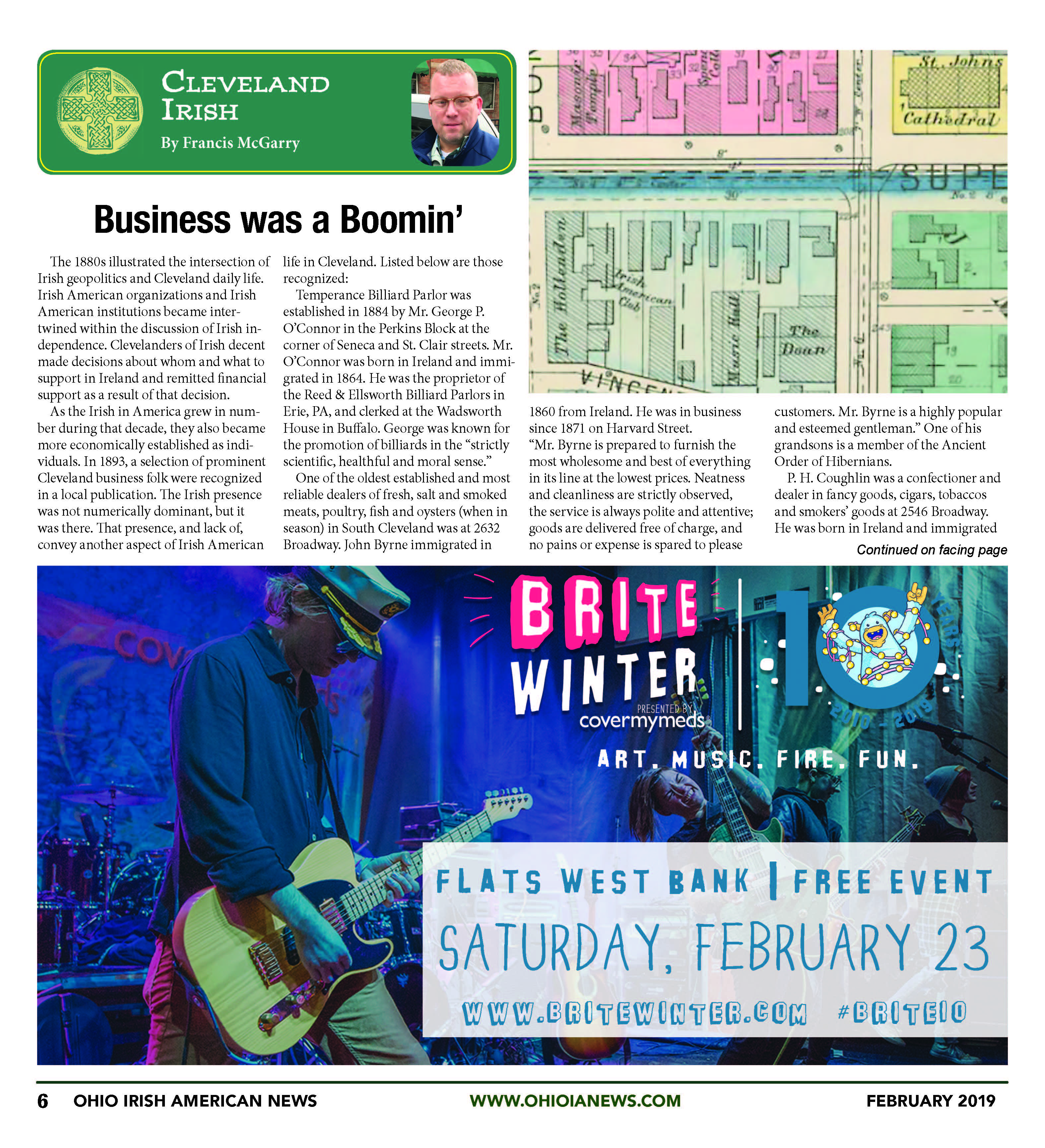