Illuminations: The Spark that Lit the Fire – Burntollet Bridge
By:  J. Michael Finn

“Resolved to march to Derry

Where they tried to club us down.”

The late 1960s were a time of upheaval and protest, not only in Ireland, but around the world.  Young people were standing up and marching for civil rights in the United States and elsewhere.  Racial and ethnic barriers were falling.  Inspired by the success of the civil rights movement in the U.S., many in Northern Ireland felt it was time to begin a civil rights movement for the Catholic community.

In September 1968, the Northern Ireland Civil Rights Association (NICRA) and the Derry Housing Action Committee organized a march to be held in Derry on October 5, 1968. On October 1, 1968, the Protestant fraternal organization, the Apprentice Boys of Derry, announced their intention to march over the same route on the same day and time, in an attempt to get the civil rights march banned. William Craig, the Northern Ireland Home Affairs Minister, obliged and banned the civil rights march from the city center.

When the civil rights marchers attempted to defy the ban, they were charged by the Royal Irish Constabulary and beaten with batons.  The Royal Ulster Constabulary (RUC) was the police force of Northern Ireland. Many marchers were beaten by the police, including West Belfast Member of Parliament, Gerry Fitt.

Two days of rioting in nationalist areas of Derry followed. Students from Queen’s University, Belfast, were inspired by these events in Derry and on October 9, 1968, formed another civil rights organization called People’s Democracy.

They began planning a civil rights march from Belfast to Derry, in order to protest the RUC handling of the Derry protest. Although the People’s Democracy leaders, including Bernadette Devlin, were advised by the NICRA not to march, the organizers decided to go ahead. The People’s Democracy March left Belfast for Derry on January 1, 1969.  The 75-mile march is now referred to as the Long March.

Loyalists in Northern Ireland viewed the People’s Democracy and the march as an attempt to undermine the Unionist government. A number of leading loyalists, including Ronald Bunting and Ian Paisley, indicated in advance of the march that they would be calling on “the Loyal citizens of Ulster to harass and harry” the four-day march.  The march began with about forty participants and soon grew to about 150 student protestors.

Each day of the march, groups of loyalists confronted and physically attacked those taking part in the march. The Royal Ulster Constabulary, who had been accompanying the march, did not make any effort to prevent these attacks nor to protect the safety of the marchers.

The most serious incident occurred January 4, 1968, the last day of the march, between the city of Claudy and Derry. The marchers were ambushed at Burntollet Bridge by approximately 300 loyalists, including 100 off-duty members of the “B-Specials.” The infamous “B-Specials” were members of the Ulster Special Constabulary, which was a quasi-military reserve special constable police force in Northern Ireland.

Stones transported in bulk from a nearby quarry were used in the assault,as well as iron bars and sticks spiked with nails. Nearby members of the Royal Ulster Constabulary did little to prevent the violence.

Many of the marchers described their assailant’s lack of concern regarding the police presence. Bernadette Devlin described the attack as follows: “And then we came to Burntollet Bridge, and from lanes at each side of the road a curtain of bricks and boulders and bottles brought the march to a halt. From the lanes burst hordes of screaming people wielding planks of wood, bottles, laths, iron bars, crowbars, cudgels studded with nails, and they waded into the march beating the heck of everybody.”

Devlin later claimed that the RUC had deliberately led the marchers into the ambush at the bridge. Fortunately, no one was killed during the encounter.  Over thirteen marchers required hospital treatment.  Burntollet Bridge demonstrated that loyalist violence against Catholics – even when carried out in front of police – could go unpunished.  No police or loyalist attackers were injured.

Eventually, the loyalist mob dispersed and the marchers, some of them still bloody from the encounter, marched into Derry.  The marchers struggled into Derry to a welcoming reception at the Guildhall.  After a night’s rest some of the marchers painted one of the enduring symbols of the troubles on a gable end of a building in the nationalist Bogside area.  It read, “You are now entering Free Derry.”  That sign became a symbol of the civil rights struggle.

Later in the evening, members of the RUC and “B-Specials” attacked people and property in the Bogside area of Derry, sparking several days of serious rioting. The investigation conducted by the Cameron Commission found that the police “were guilty of misconduct which involved assault and battery, malicious damage to property … and the use of provocative sectarian and political slogans.”

The way in which the police mishandled the People’s Democracy march confirmed the opinion of many Catholics that the RUC could not be trusted to provide impartial policing in Northern Ireland. The events of January 1969 further alienated many in the Catholic community.  In addition, the march marked the point where concerns about civil rights were beginning to give way to questions related to national identity and the legitimacy of the Northern Ireland state. Paul Bew, a professor at Queen’s University, Belfast who as a student had participated in the march, described the events at Burntollet Bridge as “the spark that lit the prairie fire.” 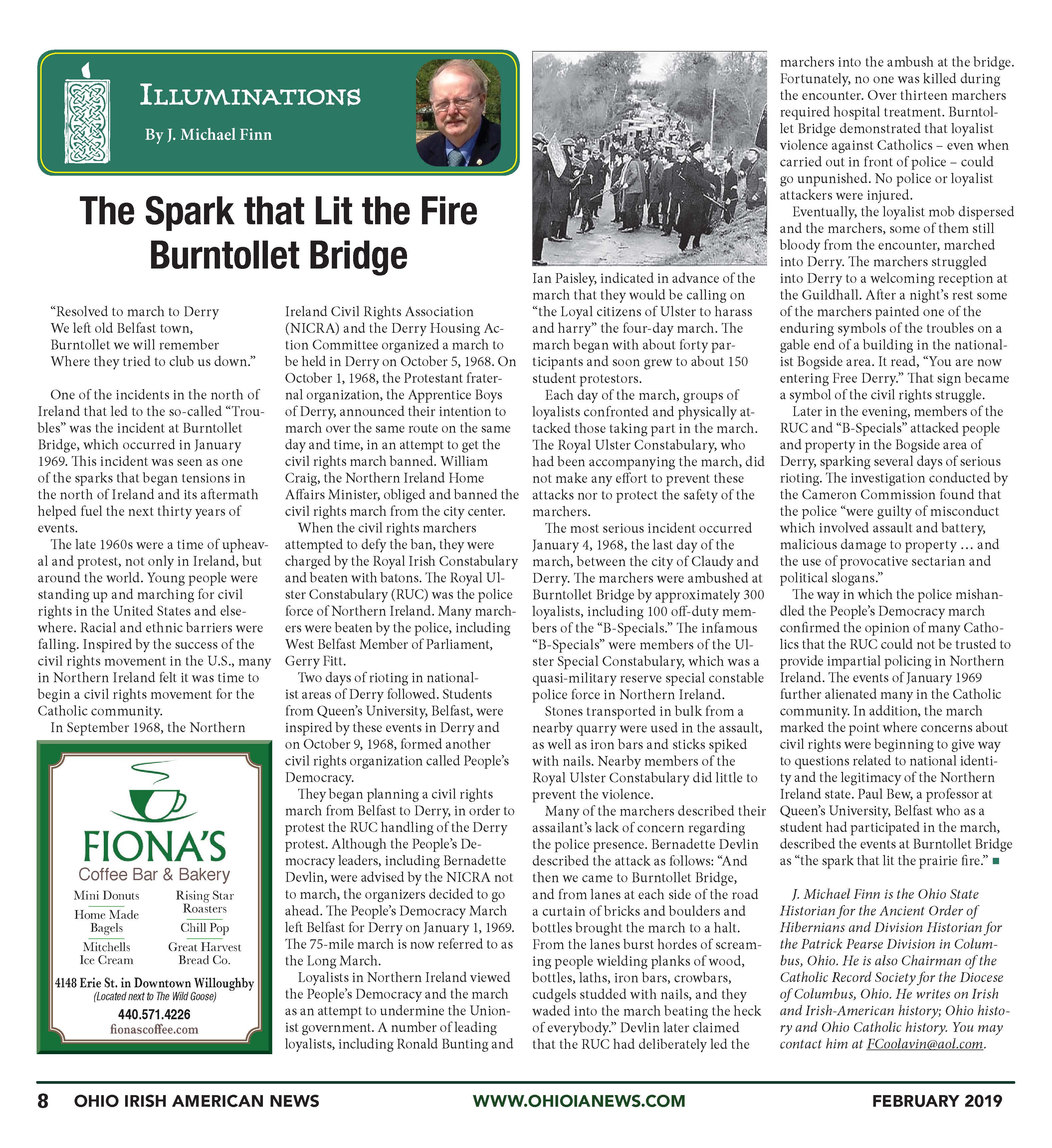 Illuminations: The Ancient Order of Hibernians and the 1918 Pandemic