When Irish Eyes Are Smiling
by Maury Collins

Father Murphy went into a pet store to buy a parrot.  The owner said; “Father, I have just the bird for you.  It doesn’t

scream, yell or swear.  In fact it’s a religious parrot.  You see those strings on his leg?  If you pull the one on the left, he recites the Lord’s Prayer.  When you pill the right one, he recites the 23rdPsalm.”  “Terrific” said Father Murphy.  “And what happens if I pull both strings?”  The parrot squawked; “I fall off my perch, you eejit.”

Little Johnny’s mother, in an attempt to get him to stop sucking his thumb, told him that of he continued to do so, his stomach wou

ld get bigger and bigger until it burst. Later that day, they went to a grocery store, where Johnny saw a very pregnant lady. Noticing that he was staring at her, the lady said; “You don’t know me, you shouldn’t be staring at me.” Johnny replied; “I may not know you, but I know what you’ve been doing.”

Mickey applied for a job at the super market and said that he had experience, having previously worked at another supermarket.  When the interviewer asked why he had left, Mickey said, “I was fired for spending too much time with the meat slicer.”  The interviewer was baffled and said; “That doesn’t sound like a serious offense to me.”  “Well they must have thought so,” replied Mickey, “They fired her, too.”

Sam and Moe were rocking on the porch of the retirement home.  Having talked about everything under the sun, Sam was grasping for a new topic of conversation.  “Tell me, Moe, have you read Marx?”  “Yes” replied Moe.  “And, you know, I think it’s the wicker chairs.”

A lawyer meeting with his client in jail says “I’ve got some good news and some bad news.” The client says “Give me the bad news first.

”   “Your DNA matches the blood found on the victim and the murder weapon.”  “What could the good news possibly be?” asked the client.  “Your cholesterol is down to 120.”

Pat:  A man knocked at my door today and asked for a small donation for the local swimming pool.
Mike:  What did you give him?
Pat: a glass of water.

The Grumpy Pharmacist: Upon arriving home, a husband was met at the door by his sobbing wife. Tearfully she explained, “It’s the pharmacist. He insulted me terribly this morning on the phone. I had to call multiple times before he would even answer the phone.”
Immediately, the husband drove down town to confront the pharmacist and demand an apology.  Before he could say more than a word or two, the pharmacist told him; “Just a minute, listen to my side of it. This morning the alarm failed to go off, so I was late getting up. I went without breakfast and hurried out to the car, just to realize that I’d locked the house with both house and car keys inside and had to break a window to get my keys.” “Then, driving a little too fast, I got a speeding ticket.

Later, when I was about three blocks from the store, I had a flat tire.” “When I finally got to the store a bunch of people was waiting for me to open. I got the store opened and started waiting on these people, all the time the darn phone was ringing.”  He continued, “Then I had to break a roll of coins against the cash register drawer to make change, and they spilled all over the floor. I had to get down on my hands and knees to pick up the coins and the phone was still ringing. When I came up I cracked my head on the open cash drawer, which made me stagger back against a showcase with a bunch of perfume bottles on it. Half of them hit the floor and broke.”  “Meanwhile, the phone is still ringing with no let up, and I finally got back to answer it.  It was your wife. She wanted to know how to use a rectal thermometer.  Believe me mister, as God is my witness, all I did was tell her.” 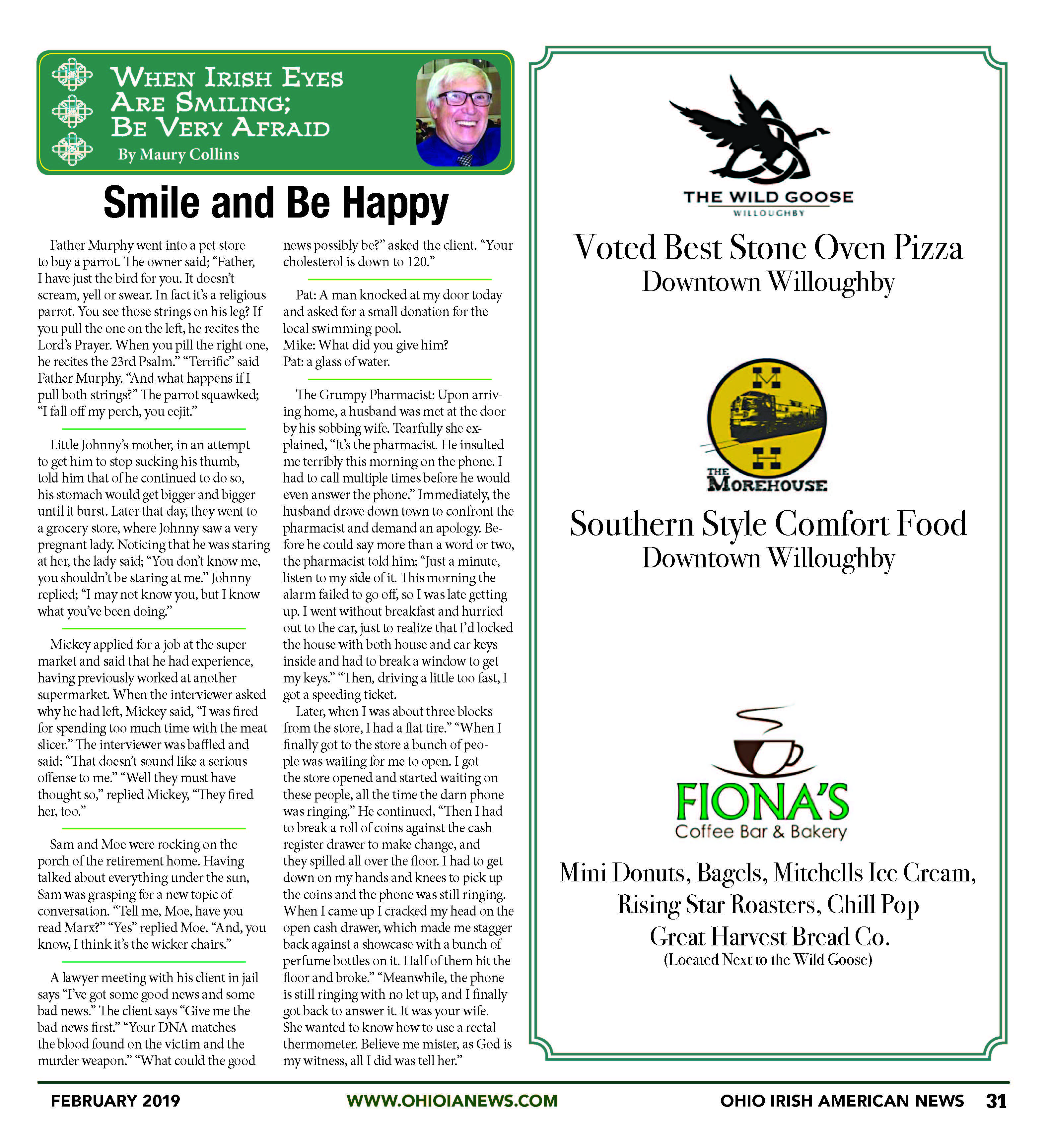 Jokes! When Irish Eyes Are Smiling

When Irish Eyes Are Smiling: Jokes by Maury Collins