Three Cousins Vie for Another State Championship
by Barry Conway 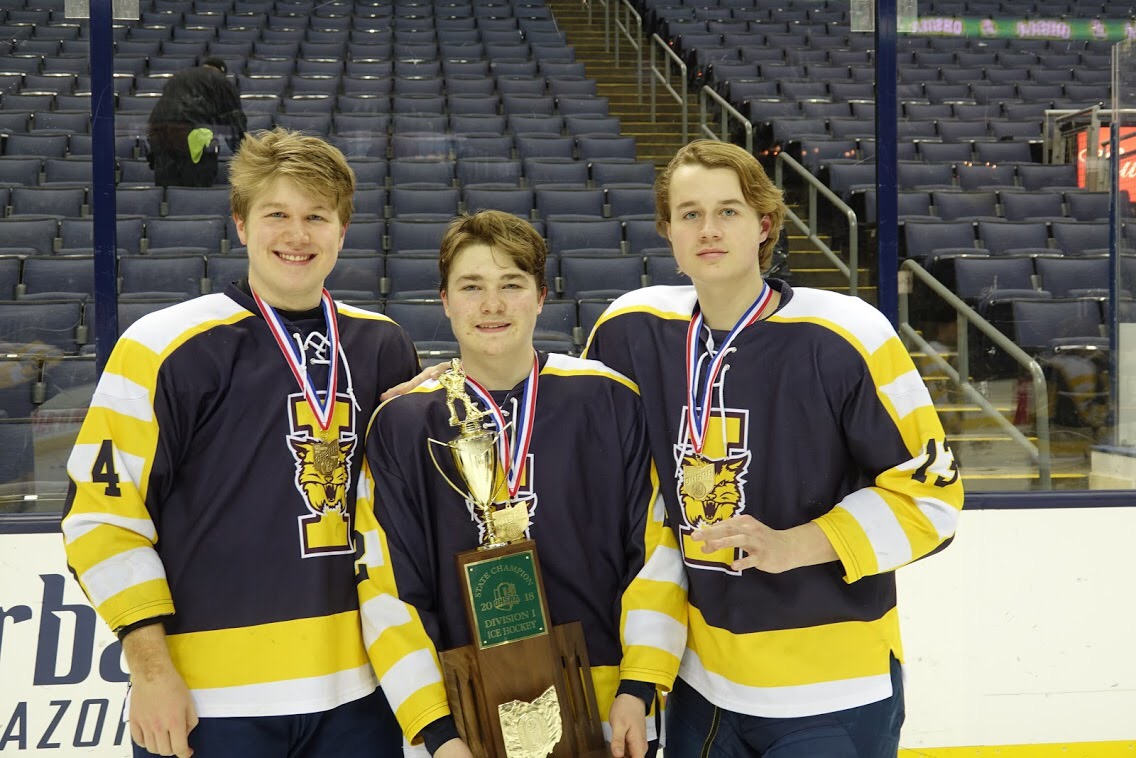 What are the odds? Three kids, with the same first name, two with the same last name, cousins descended from a small village in Ireland, would meet and compete for consecutive titles for the St Ignatius Wildcats Ice Hockey team? That is exactly what happened to Aedan Conway, of North Royalton, Aidan Conway of Lakewood and Aidan Millett of Bay Village. All three were members of the 2018 St. Ignatius Wildcat Hockey State Championship Hockey team and all three are looking to repeat in 2019. 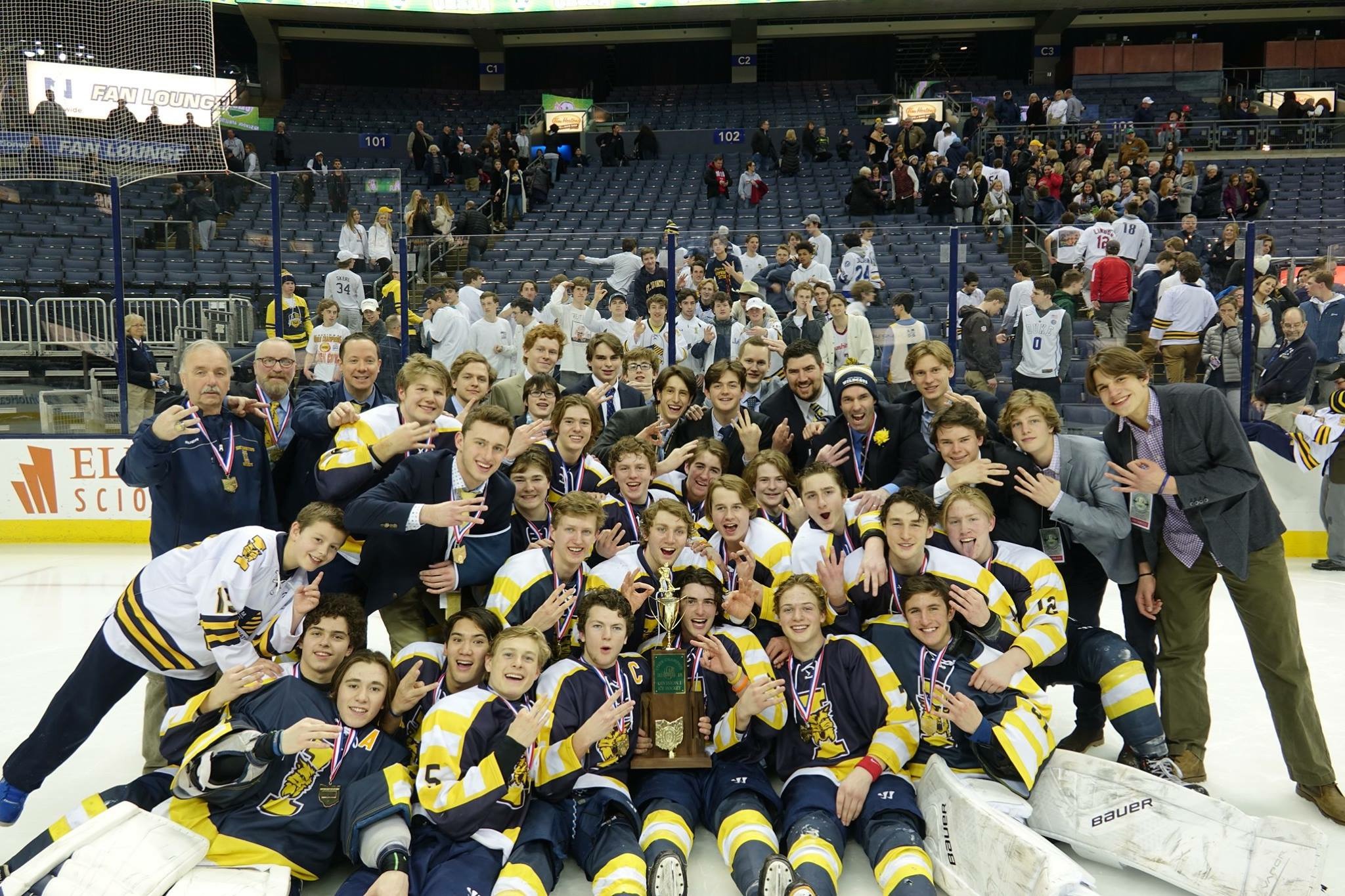 Aidan Conway of Lakewood is the son of Frank (St Ed’s Class of 1987 and former football player) and Karin Conway. His grandparents Manus and Bridget “Bridgie Ned” Conway of Bridgie Ned’s Party Room at PJ MacIntyre’s Irish Pub are both from Ballycroy, Co. Mayo, with Manus is from Tallagh and Bridgie from Doona.

Aidan Conway attended Lakewood Catholic Academy in Lakewood, OH. In his younger years, he tried Irish dance but decided that being on the ice or the gridiron was a better fit. Pat O’Rourke, Head Coach of the St. Ignatius Wildcats had this to say: “Aidan is a big defenseman who also plays football at Saint Ignatius.  I see him carrying the puck up the ice and asserting himself more on offense this year now that he is a veteran.  I would be shocked if this talented young man isn’t playing college sports, either on the ice or on the gridiron, in a few years.”

Aidan Millett, a Junior forward for the Icecats, attended Our Lady of Angels grade school before moving and attending Bay Village Middle School. In his younger years, Aidan played baseball, football, track and was on the swim team. At St Ignatius, Aidan plays lacrosse in addition to Ice hockey.

“Everyone loves Aidan,” says Coach Pat O’Rourke, “he is one of the nicest guys on the team and is a heckuva player, too.  Has the kind of skill set where he can play with anyone, so he isn’t picky about his line mates, which coaches love.  Son of a fireman, he brings a certain toughness to our team and now that he has a successful year under his belt, I believe his confidence and therefore his production will soar to even bigger heights.”

Aidan Millett is the son of Dave and Maureen and is related to the two Conway’s through his great-grandmother, Nora Leneghan, who was from Ballycroy and immigrated to Cleveland, where she met and married Thomas Millett, Aidan’s great-grandfather. Aidan’s father grew up in Willowick and attended Lake Catholic HS, where he was a star football player and wrestler. Aidan’s uncle, Tim, played football at Lake Catholic with Aedan Conway’s father, Barry, but they never realized they were cousins.

Aidan Conway and Aidan Millett have played together since they were young, starting with the Winterhurst Hockey Association and later the Cleveland Jr. Lumberjacks. When the Aidan’s dads met, they soon realized they were cousins.
Senior Defenseman and two-year letterman Aedan Conway never met the other Aidan’s until attending St Ignatius, “I was once asked to lend my jersey to another Aidan Conway when I played for Strongsville (Youth Hockey) but, we never met until here.”

Aedan is the son of Barry and Kim Conway and the great-grandson of Neil and Bridget (Campbell) Conway, both from Doona, Ballycroy, Co. Mayo. Aedan was also a champion bagpiper in his younger years. Taught by his father, Aedan won the “Piper of the Day” awards at for the Ohio and Edinboro Scottish Games and won the “Champion Supreme” award in the Ohio Valley region.

Coach O’Rourke:  “He has worked hard in the weight room all off-season and looks to be in great shape.  He has gotten bigger and taller and will take some teams by storm, I predict.  He can certainly carry the puck up ice all he wants, and he has the skills and shot to finish those rushes, too.  My pick to make the biggest leap from last year to this year.  Couldn’t happen to a nicer kid, either.”

What are the odds? Well, this did happen. As far as the odds of winning another state championship? I wouldn’t bet against them.

(I’d like to thank Frank Conway, Dave Millett, Ann Millett, Pat O’Rourke, and Jack O’Rourke, who authored the St. Ignatius Media Guide, for their contributions to this article)

The State Championship Game will be held March 9th. 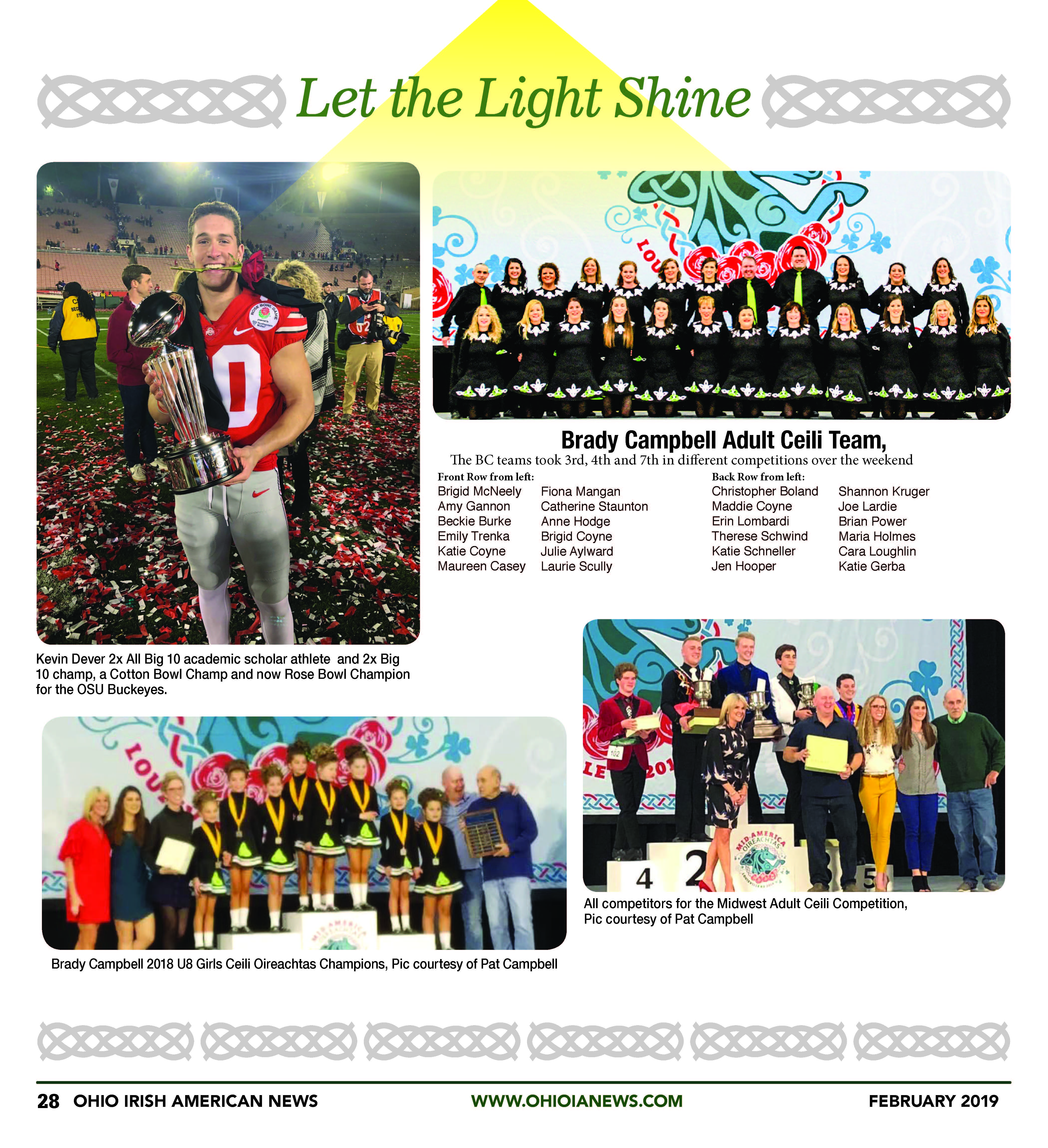 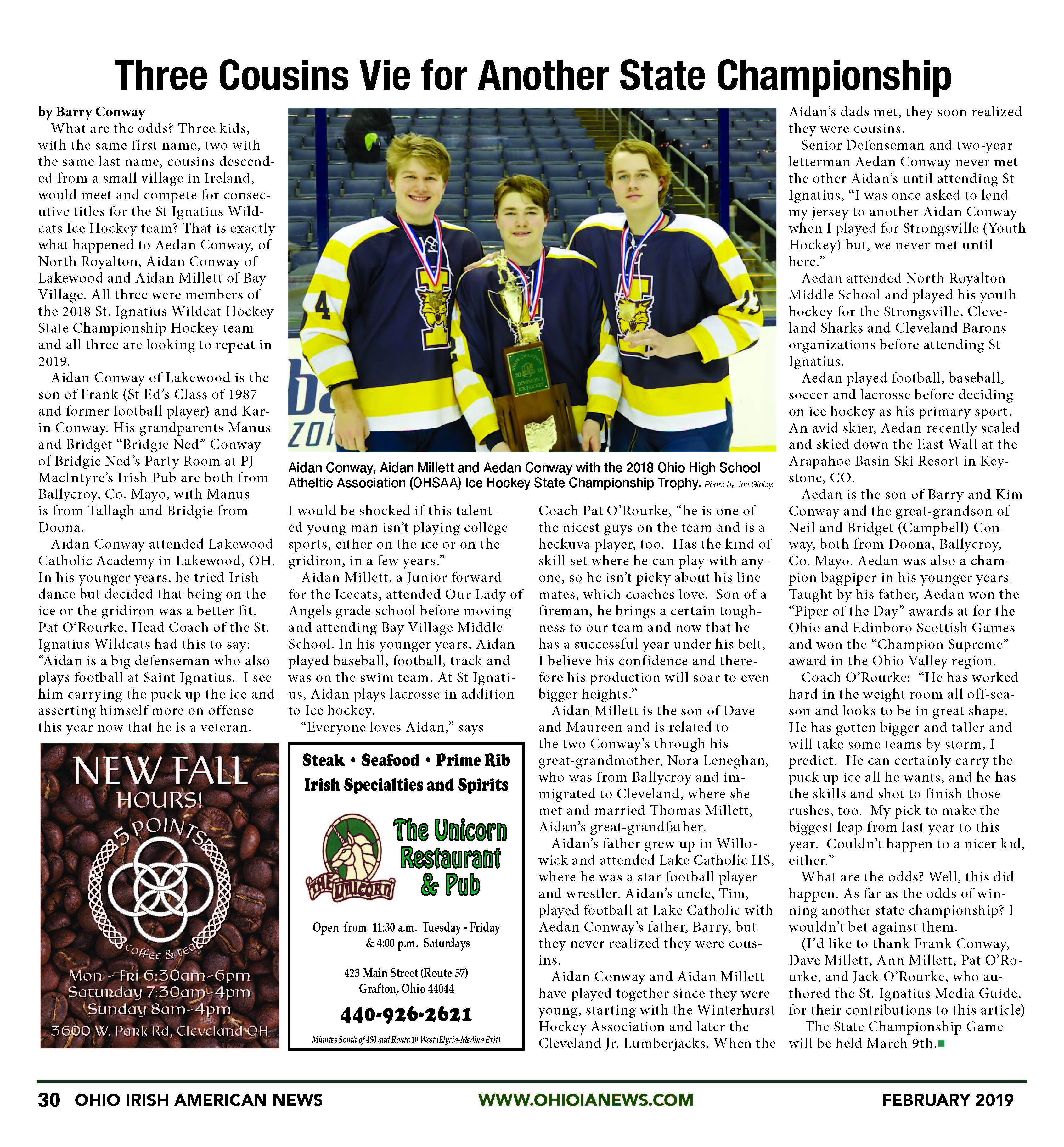 Golf for a Good Cause ~ Shamrock Club’s Irish Golf Classic