2018 has been a strange year.  For instance, my once a year trip to Derry multiplied by three.  The first was in May, when I flew to Ireland and onto Spain with my mother, sister and brother-in-law.  My mother’s health had deteriorated a lot since I last saw her.

For an eighty-three-year old woman, her spirit was indomitable, but it was now at odds with her body.  Stooped over, forced to use a walker, her bones creaked with a sound that reminded me of a wooden mast pummeled by the wind on a rough sea. The wheelchair was becoming less of an option and more of a necessity.

This woman, the master of malapropisms, was still as sharp as ever.  Her keen mind was still as sharp as a knife.  She could reduce you to your true greatness with little or no effort.  Despite butchering the language with all sorts of added syllables and errant pronunciations, my mother made it perfectly clear what she meant.

Her repertoire of sayings; turning Turk (Judas), feedingstrawberries to an elephant(gluttonous), Throwing money around like a man with no arms (strange and somewhat insensitive analogy), live horse, and you’ll eat oats (whatever) etc., continue in my head like a magical litany that evokes a host of memories.

The trip to Spain was followed up by a less exotic but more poignant trip to Donegal.   Burtonport, a small fishing village in Ireland’s least populated county, was my late father’s birthplace.  For months, she had wanted to go there and visit with a friend but no one was free to take her.

When I suggested that I drive her, there was a moment when we knew this trip would be our last together.  When there is such a sense of finality, every part of the journey becomes more significant and more profound than it normally would do if things were different.

We talked, laughed, and shared the family gossip; stopping occasionally to look at the beauty of the wild gorse, natural lakes, and bogs.  We savoured each moment believing in its importance.  When, finally, we arrived at the ‘Port’, I assumed my mother knew where we were going; a big mistake.

With no idea of where to start, and no phone to call anyone, I started knocking on doors.  It was a Sunday morning and most people were out.  However, there was one house with a door open.  I walked up to the house and called out my ‘hello’.

Eventually, a very old man appeared.  He looked in complete harmony with the rugged, unkempt, countryside around him.  When I asked if he knew where my mother’s friend lived, he pointed somewhere behind me and said ‘Oh, they live down in the depths’.  For some reason, I knew better than to ask him to clarify what he meant.  I knew that any further communication would only end in yet more obscurity.

We finally did manage to find her friend, and they had a great time catching up.  As we drove back, my mother struggled to stay awake. She wanted to treasure the experience, since I was leaving the next day.

My mother, over the years of my traveling back and forth to Chicago, always completed the visit with tears accompanied with the haunting statement; ‘I may never see you again.’  And, each time I would leave my sister to cajole her back to buoyancy by taking her to favourite pastime, bingo.  2018 proved to be different.
In October, she was admitted into hospital and I was faced with that awful decision as to whether I go back or wait until it became absolutely necessary.  No one can ever fully know when it the time is right, and I am not sure I could explain how I knew.  I just knew.

When I returned, she was in a lot of pain. For the last week of her life, we talked, when she was able, and when she was not able, I sat in vigil with my family.  She died while I was at the airport awaiting my flight back to the U.S.  I was not able to make her wake or funeral, but we had said what we needed to; I was satisfied.

In November, I was talking to fellow ex-pat and for some reason, I mentioned about my mother’s passing. What I did not know, was this man was something of a medium and wanted to pass on some message from my dead mother. Now, I am not believer in such things, but equally, I would not be disparaging to someone who does believe, so I asked him what it was she wanted to communicate.

When he told me, I could have creased up with laughter.  It was so my mother and so bloody Irish.  He told me, your mother is at peace, but she’s not happy.

His message summed up the Irish mindset so perfectly.  We are never happy, even when we are at peace.  I could see her lamenting the boredom of eternal rest, itching to convert the heavenly home into a makeshift bingo hall.  In such a biblical place of supplication and bliss, she would have a face on herenough to stop a clock.

When I returned to Derry for the third time in December, I went in search of her grave.  Not wanting to be with anyone, I made the decision to go on my own.  I was convinced that I knew where she and my father lay.

In my head, I could see the statue of Cuchulainn nearby.  Walking from the entrance of the cemetery, I passed the graves of those who died at the Somme, those who died in the subsequent wars, and arrived before Ulster’s mythical hero, Cuchulainn.

For the next hour and half, I wandered among the graves, working myself up to a great emotional climax, only have the moment robbed by another Boyle grave that was not hers.  My mother’s peace, I’m sure, was made happy watching me lost among the graves.  There was no unruly farmer to tell me she was in the depths.  No, she was in the heights, laughing no doubt, but lost to me. 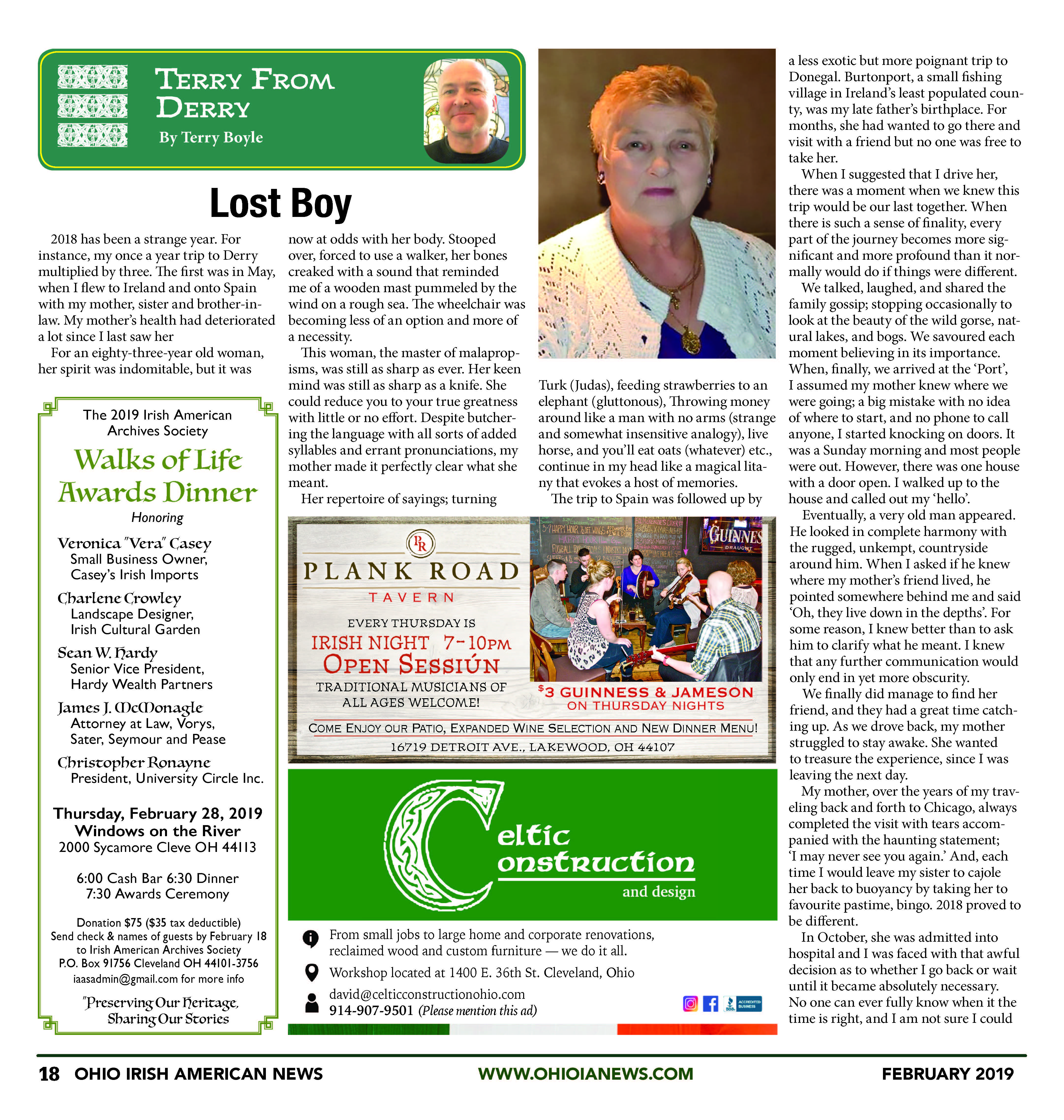 Terry from Derry: Taking the Secret Out of ‘Open Secret’: Here’s My Story